We have a number of very extraordinary collections…

Every botanical garden has special collections, sometimes even National Plant collections. The Belmonte Arboretum has a few really unique collections that attract people from far away. Especially the rododendrons and roses are popular; beautifully blossoming  abundant collections that are unequalled. We give you a short description, want to know more? Come and see!

The classification and nomenclature of Rhododendron has long suffered from the existence of the name Azalea. Linnaeus himself was the instigator, when in his “Species Plantarum” (1753), besides Rhododendron also the Azalea family was introduced, and six types were described.  As far back as 1796, Salisbury wrote that these two species can, in fact, not be distinguished botanically, and he joined them under the name Rhododendron. Despite his good intentions, the name Azalea was used by  Dutch plant breeders till far into the 20th century, and finally relinquished by the breeders amidst a lot of grumbling. Now, it is merely a common name for two types within  Rhododendron.
The Rhododendron Collection Belmonte was  planted in two periods. The oldest part of the  collection goes back to early 1950’s. Since 2003,  in cooperation with the “Nederlandse Rhododendron Vereniging”, a large new collection part has been planted, and classified according to the most actual scientific knowledge. The design for this new part of the aboretum was done by Elke de Langhe. In the eastern part of the garden, you can see the enormous variety of this species: big or small leaves, oblong  or rounded, ground covering shrubs or a few meters tall,  early flowering, or rather later: such an abundance and variety!

And finally, as a scientific name we use  Rhododendron, but in Dutch it is more common rododendron.

The rose collection in Belmonte was planted partly in 2011, mostly roses coming from the arboretum De Dreijen. In this situation, roses were scattered around the arboretum; disorderly/unclassified and inconspicuous.

The replanting of the rose collection in
Belmonte Arboretum was part of a much bigger project. In that project, the restoration of the Koetshuis and drawing up a masterplan were important as well. Preparations for these projects were begun in 2014,  with the draft of a masterplan. For this, a profound historical analysis was made of the garden, and  collections were taken in consideration , as well as the use of the garden and new opportunities/possibilities.

The results were used for a number of  substantive adjustments to the lay-out of the garden, and for the new plant sections of the roses.

Simultaneously, all roses were examined by Mirjam Lemmens (collection manager  Belmonte) and Piet Bakker. Also from abroad we received expert help,  Ms. H. (Hella) Brumme and Ms. E. (Eilike) Vemmer, from the botanical garden in Sangerhausen. All roses were checked, when required, were newly named, and classified.

The translation was put in lists and roses with different labels were marked. One collection label with the right name, group, and such, and one colored label for the contractor, with a section and location number.

To give an example: a yellow label indicates a spot in front of the Koetshuis, in section 8, number 87 on the map

To replant, a classification was made justifying the different rose groups. Now there are clusters with Historical and Modern roses, a cluster with all botanical (wild) roses, a  cluster ground covering roses, a cluster with the Doorenbos collection and finally, a group with rootstocks. Within those clusters, a subclassification was made, here, for example, the Historical roses.

By placing the roses in the garden in this logical fashion, we can give specific information on the sign boards, and during tours.

Besides this substantive classification, directive for the replanting, we also considered the public. The rambling roses have a place on either side of the Koetshuis and form a beautiful background for weddings, and parties. 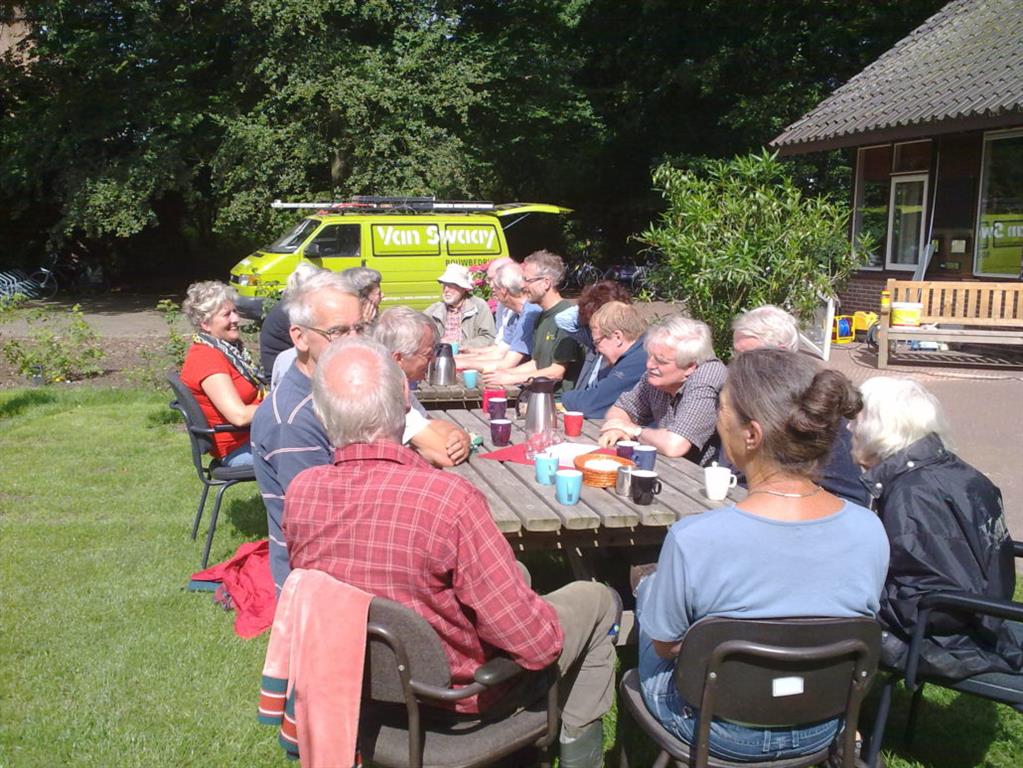